Small ship specialist Windstar Cruises is expanding to the Middle East with a series of sailings starting in November 2023, plus a host of other new itineraries. The line, which operates a fleet of six boutique cruise ships and sailing yachts, has also introduced an all-new vegan menu.

The three new Middle East itineraries will be on the all-suite 312-passenger Star Legend and take in UNESCO sites, beaches, wildlife, golf courses, snorkelling and diving, and shopping. They range from the eight-night Arabian Nights and Egyptian Days sailing covering Egypt, Saudi Arabia and Jordan, to the 17-night Wonders of Arabia cruise from Athens with ports of call in Egypt, Jordan, Oman and the UAE.

Other new cruises for 2023 include flagship Wind Surf sailing on week-long winter Caribbean itineraries with stops in St Martin, Anguilla, St Barts, Jost Van Dyke, Virgin Gorda and Tortola. These cruises will focus on beaches, swimming and snorkelling with the yacht’s watersports platform will be operational every day during the sailings. In Europe the nine-night Comprehensive Germany and the Kiel Canal departs in August and includes overnight stops in Copenhagen, Hamburg, Harlingen and Amsterdam.

Windstar has also been increasing the number of longer itineraries with its biggest to date this year. The 84-night Grand European Bucket List Adventure, from Iceland to Turkey, sets sail in July and will visit 60 ports. 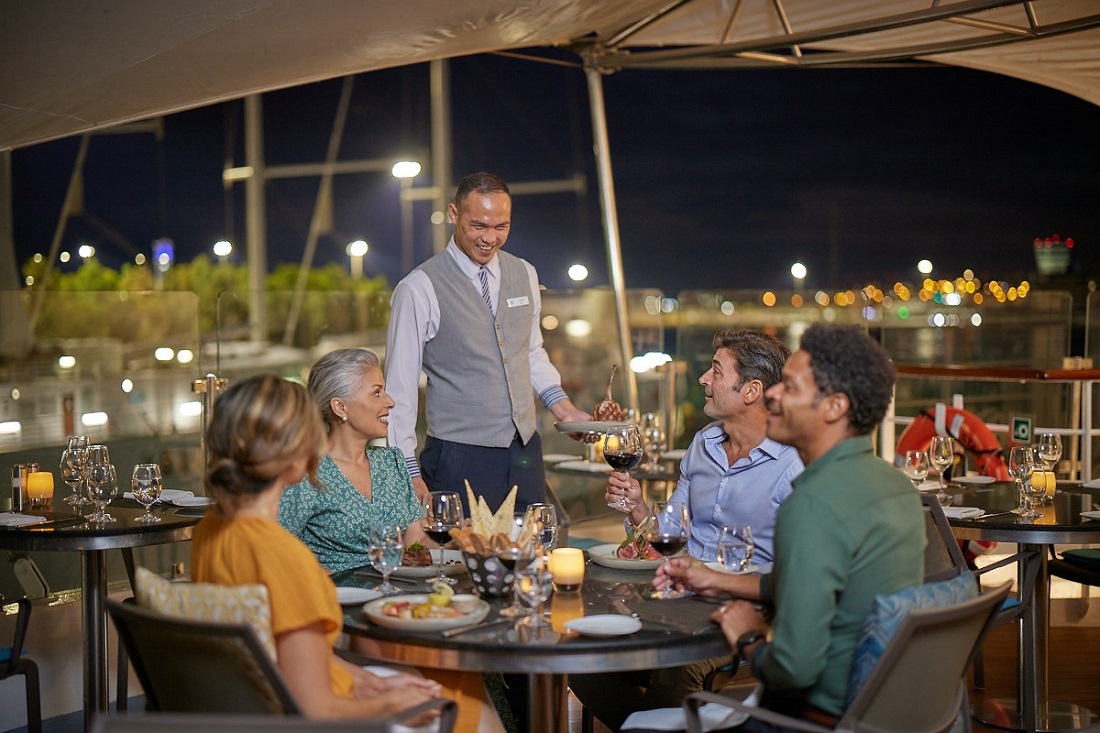 Windstar president Christopher Prelog said the move will create more guest capacity in the region with an elevated dining experience due to Breeze’s multiple dining options, enlarged spa and fitness centre and spacious all-suite accommodation. The move will see Wind Spirit relocated to sail in the Greek islands and other Windstar destinations.

Additionally, starting in winter 2024 there will be a new six-night round-trip cruise in Costa Rica, from Puerto Caldera. The sailings along the Pacific coastline will feature calls at San Juan del Sur and Corinto in Nicaragua and can be combined with the line’s Panama Canal itinerary to create a 14-day voyage.

Windstar has also created a new vegan menu across all six vessels to cater for increased demand in plant-based options, which will run alongside existing vegetarian and meat-based menus.

“The offerings are not only plant-based but also prepared without added salt, oil, sugar or flour. Windstar has begun training its culinary team on the new menus and plans to roll out the programme fleetwide at the end of March.”

Windstar recently invested $250 million in renovating its three Star Plus-class vessels, which added new suites, restaurants and a spa and gym. On every sailing across the fleet the line offers guests the choice to upgrade cruises with an all-inclusive fare option, costing $89 per passenger, per day, and covering an open bar, Wi-Fi and gratuities.

Windstar operates cruises throughout Europe, the Caribbean, Costa Rica and the Panama Canal, Asia, Alaska and British Columbia, Canada and New England, Tahiti and the South Pacific, Mexico and US coast, and Australia.

Known as the ‘River Cruise Queen’, Jeannine Williamson is an award-winning travel writer, cruise expert and our cruise correspondent, who has clocked up thousands of nautical miles.

Marella Cruises has announced that a fifth ship will join the fleet and the line will also be offering new itineraries in America. The 952-cabin Marella Voyager will set sail in the summer of 2023 […]