There are many different ways to commemorate the souls of those who have sadly departed. The traditional convention is for gravestones, flowers and crying. Maybe a spot of embalming, for those who wish to prolong the process, or even cremation for people who take the idea of ‘ashes to ashes’ quite literally.

In Mexico, they make little skulls out of sugar instead for the families of the deceased to eat. Granny just died? Well, have a sweet in the shape of her head. Bound to make you feel better. Rather than a macabre endorsement of cannibalism, this unique confectionery is one of the many common ways they have in Mexico to celebrate ‘el dia de los muertos’ – the Day of the Dead – from 1st to 2nd November.

So fond are the Mexicans of their deceased relatives that they often make little puppets out of them, or even dress up as dead people on the Day of the Dead. Think of it as Christmas for those with no pulse. The costumes tend to be elaborate, even though all that is probably really needed is a mouldy suit and some white foundation.

The gallows fun doesn’t stop there either. On the Day of the Dead, people bring offerings such as tequila to the gravestones of their forebears (presumably the ones they didn’t like) as well as blankets and pillows in case all those defunct people are feeling cold or uncomfortable in their coffins. Entire families sometimes picnic in cemeteries, bringing along the favourite foods of their dead relatives, even though most of them lost their appetite some time ago. 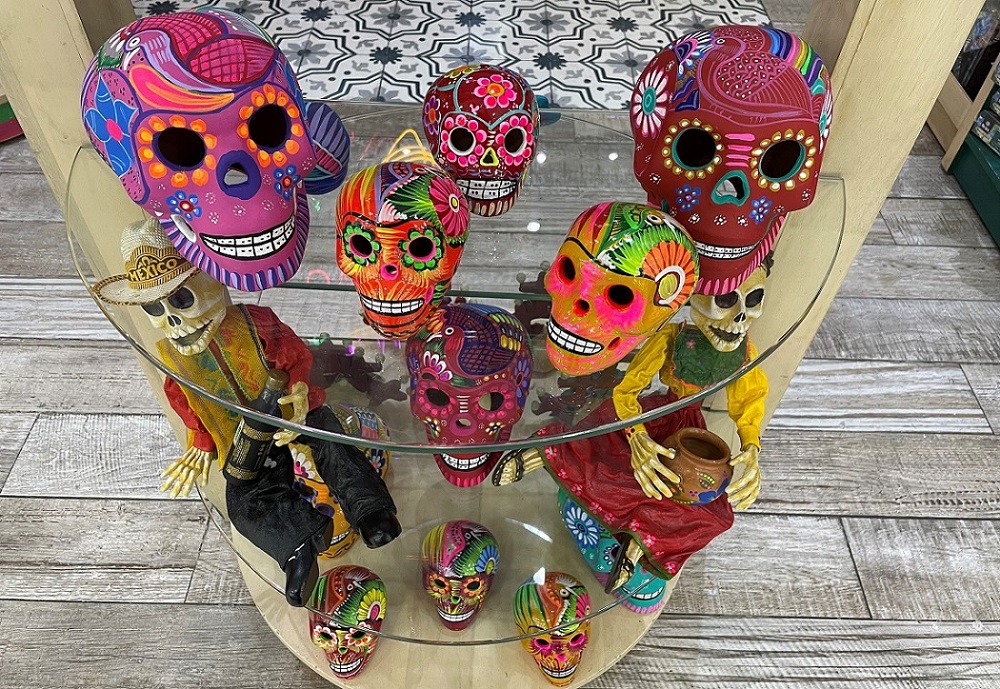 Those who are hungry (or simply alive) can tuck into ‘pan de muerto’ – the bread of the dead – which is essentially a sweet bread made with anise. The funereal parties go on late into the night and the most hardened revellers wear seashells on their clothes, as their rattling is meant to wake the dead. For the rest of the year, Mexico relies on its ubiquitous Mariachi bands to perform the same task – which blend the harmonies of a Boeing 747 on take-off with the melody of a washing machine being thrown down a flight of marble stairs.

Along with the importance of washing your teeth in mineral water and not eating roadside tacos, these are just a few of the fascinating facts that I have learnt about Mexico over the last couple of days, during which the Day of the Dead festivities have been in full swing.

For anyone who doesn’t get it, just check out the opening sequence of the James Bond movie Spectre, below, filmed at the famous Zocalo Square, which is just down the road from my hotel.

As I write, there are more explosions going on than you’ll find in Q’s laboratory, as the Day of the Dead is a four-day firework festival as well – which happens to go on all night too. So you may as well join in, because if you want to sleep, forget it. There’s plenty of time for that when you’re dead.

Unusual Etiquette Rules Around The World

Keen travellers will know that when you visit a new country, you get to experience a whole new culture too. The way people eat, greet each other and even where they sleep will differ from […]

Around half of holiday makers say that swimming is on their to do list, making the activity far more popular than staples such as viewing museums and historical sites. No summer holiday is complete without a […]