If you happen to be in Paris between now and 5th March, 2023, there’s an unforgettable way to bring the reality of your visit into sharp focus. The Musée Maillol on the artsy left bank is hosting an exhibition called ‘Hyperréalisme: Ceci n’est pas un corps’ – translated into English as ‘hyper-realism: this is not a body’.

That slogan alludes, of course, to René Magritte’s famous painting of a pipe from 1929, with the equally famous legend: ‘ceci n’est pas une pipe’ – this is not a pipe. Except, of course, that it actually is a pipe, if we choose to believe the appearance at least. So hyper-realism is only addressing a question that’s been around for nearly a century in artistic circles. What is real and what is not?

The term only first appeared in the 1970s to describe high-fidelity realism in painting and sculpture, in which the ordinary becomes the extraordinary through painstakingly close attention to detail. And the message is emphatically that beauty is all around us in places we don’t expect, following the principle that reality is truth, and truth is beauty.

This can of course be taken to extremes. In November, the museum hosted an evening during which all the visitors had to be naked, becoming a dynamic part of the exhibition. These days, you’re expected to be fully clothed, but you’re surrounded by a number of nudes, who instead are statues. Or are they? The point about hyper-realism is that you can never really tell.

Some of the biggest exponents of hyper-realism are artists such as America’s Duane Hanson and Australian Ron Mueck. They are about as far removed from traditional sculptors, who work with stone and chisels, as you can get. Instead, they work with innovative gels, moulds, waxes, plastics and casts to reproduce the most accurate facsimiles possible of their subjects. Yet it’s not simply a question of making a ‘copy’: that would not be art. Instead, the art lies in the poses that are selected and the meaning behind the choice of subjects. 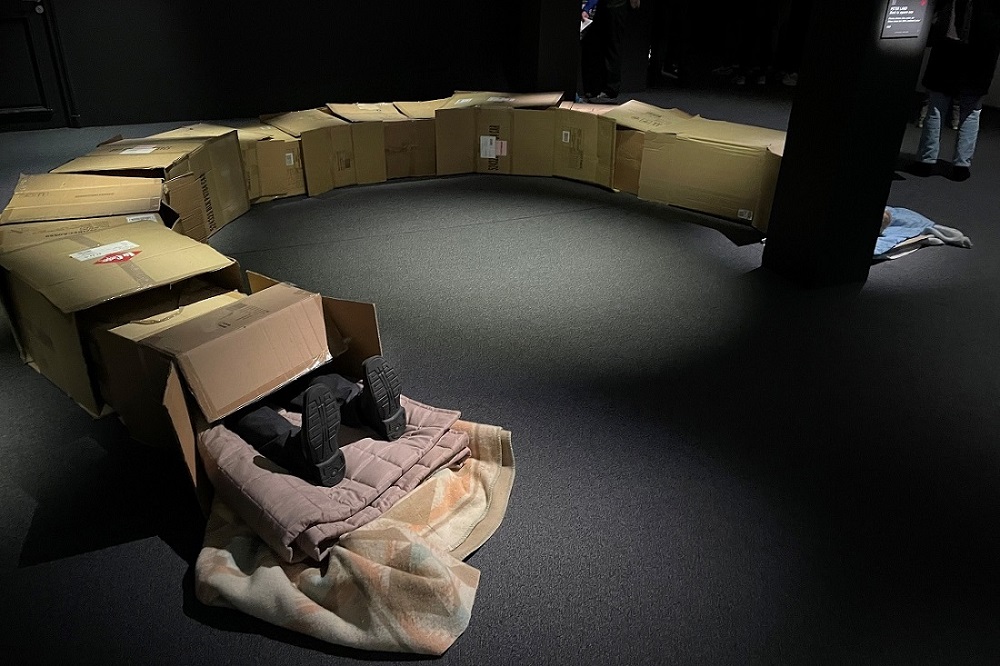 Hyper-realism represents the intersection between sculpture, photography, technology, and reflection: in the philosophical as well as the literal sense. If art exists to hold a mirror up to the world, then hyper-realism is probably its ultimate expression. As sculptor Auguste Rodin said: “Any artist worthy of the name has to portray all of nature’s reality: not just the truth on the outside, but especially that on the inside.”

That evocative quote is displayed on the wall, just above a homeless man sleeping on the ground in a collection of cardboard boxes. You can see his head poking out of one box and his feet coming out of the other side – but it’s an obscenely long trail of boxes in a U shape, stretching his body almost into a full circle, which is largely the point of what turns out to be a self-portrait of artist Peter Land.

The 40 or so other pieces of art contained within this memorable exhibition focus largely on the human body, making you see it in ways that you would never have imagined. A close-up of a piece of tattooed skin, for example, now resembles something like a hairy Grand Canyon, intersected by a bright azure river of ink.

There’s also a nose that is nearly as big as your body, as well as a captivating woman and child sculpture by Sam Jinks (seen on the exhibition poster plastered all over Paris) that’s about three-quarters life size. There are no barriers, ropes, or cordons: you can go face to face to face with her (along with all the other subjects) in a way that feels disturbingly intimate.

Hyper-realism is also about undisguised voyeurism. You’re encouraged to look and really see someone’s foot, for example, as you’ve never seen it before. It’s common to ogle over paintings: but the 3D nature of this show makes it startlingly real. To the point that you feel you don’t want to intrude, as you subconsciously endow these artificial works with human characteristics. The commonly recognised goal of popular fiction is to enable the reader to suspend disbelief. In this case, it applies to art as well. 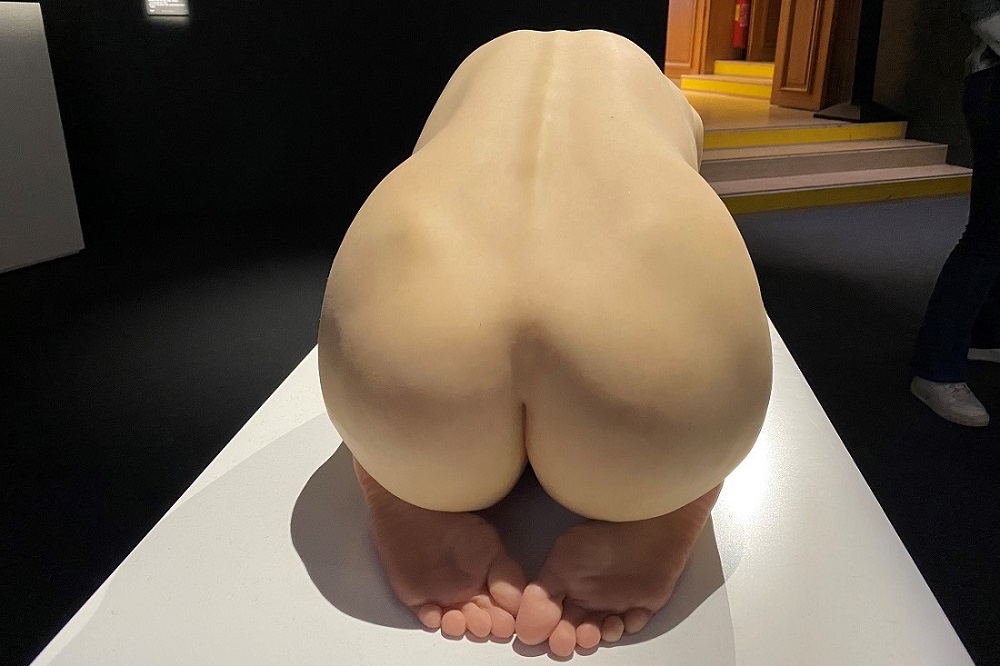 These incredible creations blend the ordinary – as we’re all very familiar with the subjects – with the unfamiliar, as nobody would ever recognise the proportion or detail. So that creates a certain confusion; a strange dichotomy that makes you question the nature of reality while forcing you to stare at it, right in the face. That’s what makes this unusual exhibition so compelling.

As well as taking you to the frontiers of reality, the show is interspersed with short videos from the artists, which tell you how the illusion was created; a bit like David Copperfield deconstructing his sleight of hand. One of the best contributions comes from American artist Carole Feuerman, who explains exactly how she creates her mesmerizingly authentic statues of swimmers. But it doesn’t ruin the magic.

This is augmented reality that even goes to the extreme of having artworks that talk to you: walk past a man in a wheelchair and he’ll suddenly speak – in German. Not just that, but his eyes move to follow you. Next to him is a plain wooden chair: you’re invited to pick it up and hug it to your body in a very specific way, according to a set of written instructions from the artist.

Congratulations: you’ve just become a hyper-realist sculpture. A fascinating pseudo-fake world where nothing is as it seems – and yet everything is unsettlingly recognisable. A must-do for your next trip to Paris, even if you think you know nothing about art.

“Enjoy your trip!” said the smileless lady who issued my 200 Baht ticket to enter Thailand’s House of Opium opposite the Anantara Golden Triangle Elephant Camp & Resort in Bang Sop Ruak village near Chiang […]

How To Recreate Activities You Miss At Home

The past year has been a shock to the system, as the global pandemic caused the world to come to a screeching halt. As outlined by the BBC, there have been countless economic and social consequences, […]

Be under no illusions, the Twist Museum in London is the real deal when it comes to experiencing the weird and wonderful. The Oxford Street sensation which opened its doors in November is a real […]