Sometimes a Black Velvet moustache is not enough to tell your partner you love them.

Sometimes the Grand Marnier, Hayman’s Sloe Gin and even St Germain elderflower fails, and the Crème de Cassis doesn’t go down as well as it once did.

And the Kir Royale tastes a little stale on St Valentine’s Day.

So, instead, why not treat your honey to some British B-Corp certified Besou?

The new, all-natural bittersweet aperitif and spritzer is made by Beehave Beverages from Cotswolds honey from ethical apiaries. Ten percent of all profits go to the Bees for Development charity. It makes a good Beegroni and Beelini.

It is already stocked by The Savoy, The Berkeley, The Connaught, Chiltern Firehouse, Annabel’s, Dukes Hotel, Nobu Hotels, The Goring and The Lanesborough.

How can you spritz up your Prosecco and Cava on February 14th?  Perhaps try a new Prosecco like Sea Change? The range of ethically sourced, environmentally conscious Surrey-based wines are designed to help tackle this global issue through the generation and donation of funds to key charities and environmental projects.

Or Lyme Bay Winery’s Brut Reserve or Blanc de Blancs 2016 with a little LTC in the form of LBW cherry brandy or elderberry and port liqueur.

What else can you add to pep up the familiar fizz, get the best from your Glera grape and make the gift and toast more special and personalized?

If Aperol is passe, Bols boring, Absolut Vanilla a surprise no more and, sadly Cuisse de Nymph (Maiden’s Great Blush) not made anymore, how can you supplement the sparkly on the Big Day?

And compensate for Limoncello having lost its novelty. 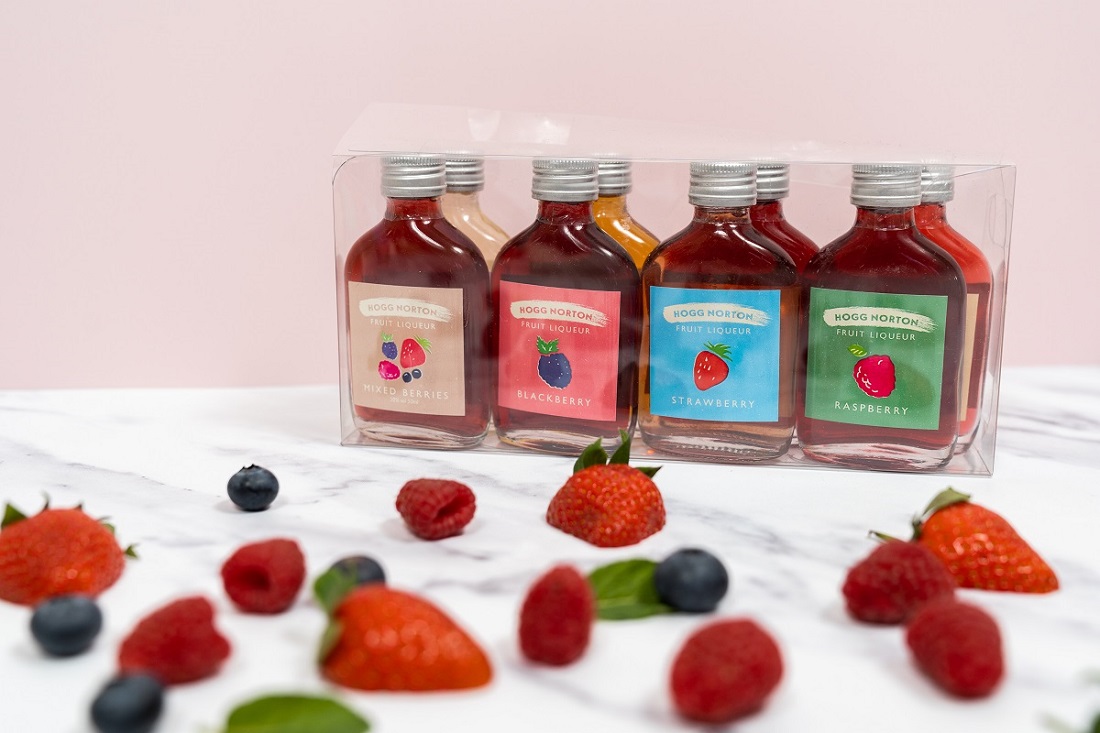 And Chesterfield just as romantic as Paris if you buy him or her a bottle of Hogg Norton gooseberry liqueur. Or something else lavish from the Peak District farm-cum-distillery to drizzle over dessert. Like Hogg Norton’s Spiced Plum and other lush fruit liqueurs? You have to be a bit extravagant and fruity on Valentine’s Day.

You can never get bored with Chambord.

Made from black and red raspberries, Madagascan vanilla, Moroccan citrus peel, honey and Cognac, from a late seventeen recipe from the Loire Valley, said to have been introduced to Louis XIV on a visit to the Chambord Chateau. Its spherical bottle was originally modelled after a globus cruciger, the orb and cross Christian symbol of authority since the Middle Ages.

A Kir Imperial is Chambord and Champagne.

But perhaps the most romantic gesture on Valentine’s Day is to pick some flowers for your loved one. Or rather, get Gabriel Boudier’s Crème De Violettes via Master of Malt to do it for you with a bouquet of March and Queen Charlotte alpine violets.

Gabriel Boudier, who also make Saffron Gin, was founded in the 1870’s. as the House of Fontbonne and began producing liqueurs in Dijon, France. Gabriel Boudier bought the house in 1909. Its portfolio of “Les Inimitables” and “Les Festives” are recipients of the Diplome d’Honneur.

There is also Pierre Ferrand’s Dry Curacao. If your other half is an orange person.

Fine wines deserve fine spirits. A Pierre Ferrand liqueur is perfect with Champagne and all sparkling wines. The French Cognac house in the Grande Champagne district’s current Chairman, Alexandre Gabriel describes himself as “a creator of emotions”.

Born in the medieval French town of Cluny in southern Burgundy, he studied at Macalester College in Minnesota. The now fine spirits house is headquartered in the 18th century Chateau de Bonbonnet. 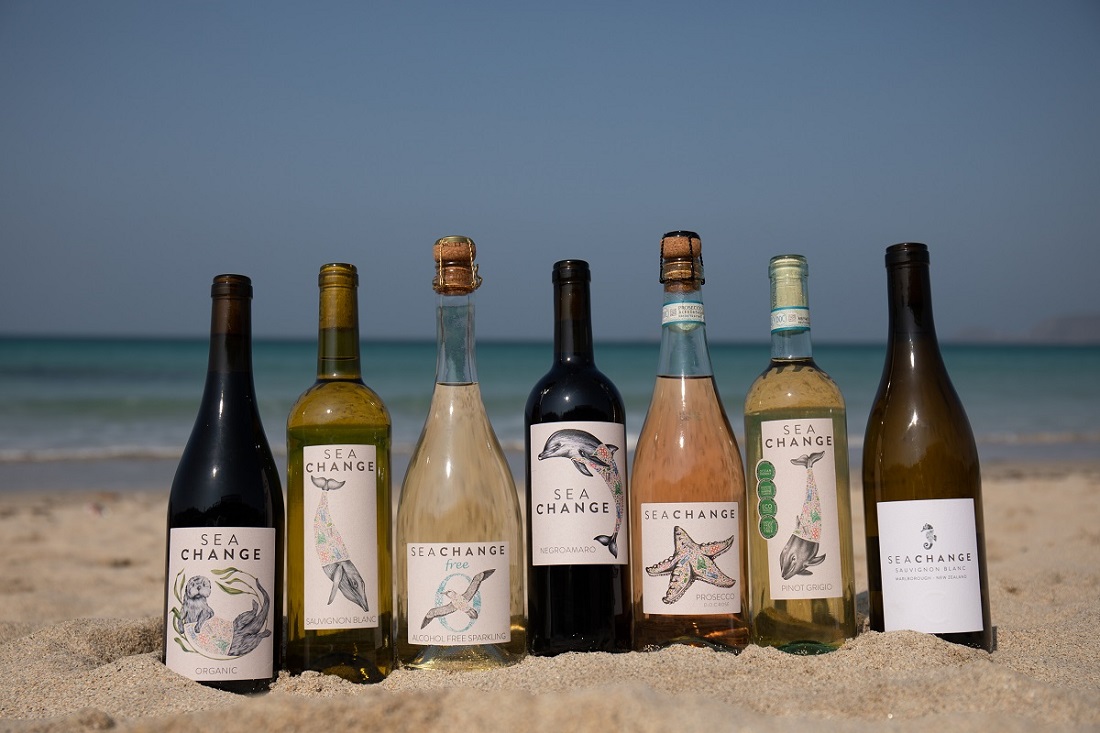 “Growing up in Burgundy, I remember drinking wonderful cassis liqueur which my grandmother made. I still remember the taste and wanted to make one just like it. That is how Mathilde Liqueurs were born. I feel that too many of France’s gastronomic treasures are in danger of disappearing and I don’t want France’s great spirits to be among them.”

Edmond Briottet is also based in Dijon. The company goes back to 1836 and now produces liqueurs from banana to melon and their famous rose. Polish Lanique liqueur is made from Attar of Roses which are worth more than gold, pound for pound.

If your loved one is a ginger person, it has to be The King’s Ginger. From Berry Bros & Rudd in London.

The “fortifying beverage “was originally created in 1903 for King Edward V11. His doctor prescribed it! “To stimulate and revivify His Majesty during morning rides.”

After his death in 1910, it was commissioned exclusively for the royal family. In 2011 it was standardized and made available to the public in select countries. 82 proof, The King’s Ginger comprises a neutral based grain spirit, ginger, lemon oil, Sugar and Glenrothes single malt Scotch.

Or you just go Giffard.

They have been making liqueurs for five generations since making Menthe-Pastille in Angers, Loire in 1885. Crème de Passionfruit and crème de peche perks up any  supermarket, off-licence or cellar door bought fizz.

If there are Welsh connections, why not Velfrey Vineyard’s sparkling Pefriog with Glyndwr brandy? Or a Welsh Velvet (Melfed Du) made from porter style Welsh craft beer?

Irish? It has to be Irish Mist. Scottish? Boe Bramble? Dark Matter’s Spiced Rhubarb or Mocha?

Or some Stag’s Breath.

Or maybe something a little more refined like a bottle of very English Welcombe Hills Orphelia Blanc De Noirs sparkling wine. From Stratford-on-Avon. Jonathan and Nicola Kelsey grow their vines on land once farmed by the Shakespeare family. So, a very romantic touch.

With a Beesou top, of course.

A successful St Valentine’s Day is all about the detail. The dashes and splashes. Tweak his or her tipple in February.

A Little Sip Of Ojai

With its Mediterranean climate, indie-anchored charm, and mountains that epically turn pink at sunset, few places are less polarizing than the idyllic nest of restoration known as Ojai.  Apt for a city named after the […]

As many wine lovers know, South Africa produces some superb wines and Pongrácz, for those of you unfamiliar with the brand, is part of the portfolio of Africa’s leading producer of wines, spirits and ciders, […]

Throughout the month that I recently spent on Madeira, the subject of wine came up frequently. This was largely due to my repeated purchasing of the stuff, be it in a restaurant, bar, supermarket or […]