There’s a lot that’s special about The Vineyard Hotel in Cape Town. First off, it is located next to Table Mountain. So I wake up to this wondrous geological formation looming outside my bedroom. Then there are the tortoises. What I thought, on day one, was one gigantic tortoise zipping at jet-speed around the hotel grounds turns out to be over ten tortoises (they are numbered) taking up different positions in the garden. Quirky signs warn guests that there will be animal traffic and to be cautious and cross paths slowly. Then there’s the outside pool that has a bird or two (an African hornbill? An Albatross? Who knows?) that hops in and out of the water for a dip, especially for evening showers.

Another special aspect of The Vineyard Hotel is that the original building was erected in 1798 as a country cottage for one Lady Anne Barnard and her husband, Lord Andrew, (who was secretary to the governor of the Cape), and it was then rebuilt as a mansion. And this ‘estate’ has been evolving since then and now encompasses everything from an 18th century mansion to 211 luxury, contemporary rooms, a steel and glass-covered courtyard dining room with a towering tree growing inside it, and chic apartments. Oh, and it’s also special that the hotel is set in seven tranquil acres with a river and vineyards at the bottom of the garden.

It’s located in (if you’re from London) what could be termed the St John’s Wood of the Cape Town: a leafy suburb called Newlands. Yet it’s just a 15-minute drive from the hub of Cape Town with its V& A Waterfront, galleries chocca with African artefacts and international restaurants (whether you want ostrich steak or sushi).

It’s also near Kirstenbosch (one of the world’s best botanical gardens) and the glorious Constantia wine estate. Additionally, there’s a complimentary shuttle bus from the hotel to one of the Cape’s top shopping centres: Cavendish Square. Yet it’s far enough away from the buzz for everything to feel peaceful and tranquil enough for me to enjoy morning yoga and feel that I’m in a retreat.

It’s a place that’s hard to categorise. Let me try. It’s sort of four-star hotel meets luxury AirBnb, cross-dressed with an old Pall Mall members’ club meets conference centre but showing off some contemporary, residential chic too. Something also feels very English (the older parts of the hotel’s architecture built when the Cape of Good Hope was under British military occupation) and colonial (the fact that all of the waiters and waitresses are either coloured or black) alongside its Dutch-meets-African aspect (in its fusion of designs and décor).  Additionally, it is family owned. Let’s call its category ‘unique’.

The Vineyard Hotel is also somewhere that inspires great affection. One woman talking to the valet driver (whom we name ‘Old Papi’; there are two Papi staff who park guests’ cars) states: “I’ve been to the Vineyard every day for the last fifteen years.” “Wow! Really?” I ask. “Maybe that’s an over-exaggeration,” she replies. “But I’ve certainly come at least once or twice a week for that time.” 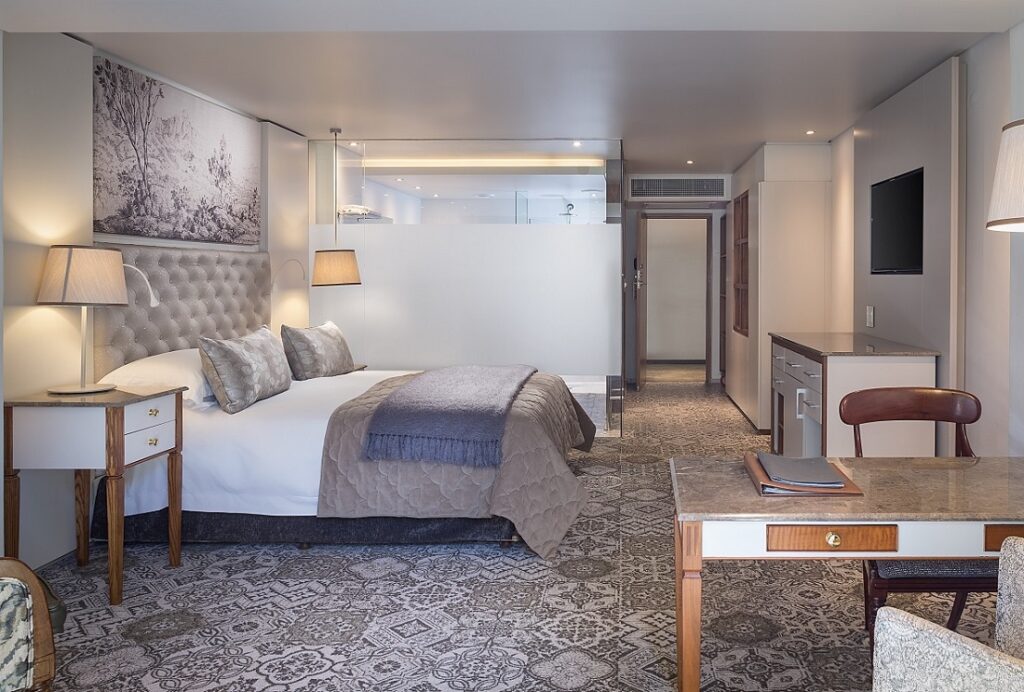 Guests seem to come back day after day, year after year. And many of the staff stay decade after decade. “Cheryl Marrock at guest relations has done every job in the hotel,” says the GM, Roy Davies. “She’s been here 40 years.”

Even at breakfast, the hotel is full, despite the fact that it’s low season. It’s full of people wanting to chat over a classic buffet and (in my case) the best creamy, wild mushroom dish with spinach and poached eggs.

So what’s the lure? The roaring fires dotted around rooms with sink-in sofas that face rows of books and silverware make this place feel homely. It’s somewhere that I feel happy to loll around sipping a chai latte or red cappuccino (made with the local red bush tea). It’s partly because the staff are so warm and friendly, all going out of their way to have an extra laugh and make guests really feel really comfortable. I am touched by the fact that often they put a hand to their heart then bow gratefully – as if in prayer – when handed a tip.

Its attraction is, in part, its well-kitted gym that is open to non-residents. Ooooh, and there are its two award-winning restaurants serving delicious contemporary Cape cuisine. If you fancy a six-course tasting menu paired with Cape wines, then you should hot foot it to Myoga; and if you don’t want so many courses, just make sure you leave room for the guava and rose sorbet. Then there’s its Angsana Spa that boasts body polishes with almond milk and relaxing signature massages. And its unbeatable, home-from-home deluxe apartments offering families two bedrooms, a kitchenette, cool open plan living and dining space and terrace with tip-top views of the mountain.

What else makes this hotel stand out? The bird watching in its garden. Its jogging routes past the vines. Its eclectic mix of guests, from businesspeople to families, locals and tourists. Its weekly wine tastings and yoga lessons, but not together. The fact that it hosts ‘hotel plays’: Tennessee Williams performed between the courses of a wine-paired dinner. On top of that, there’s not just that outdoor pool that the birds love, but also an indoor one. And an award-winning business centre.  Laundry that comes back pressed better than new and delivered at a New York pace. Plus, there’s the aforementioned valet parking that’s in a secure garage (a necessity: our Avis rental ‘lost’ its wheel hubs when parked on the other side of town without a car ‘guardian’).

There is, in addition, enough sustainability in The Vineyard Hotel to make some turn green (including with envy): cardboard straws, primarily indigenous plants (Capetonians are big on removing alien vegetation from their country), and only organic fertiliser. Used soap is recycled and there’s an old battery collection point by the front door. There are 80 solar panels and green energy from a local wind farm. Plus, they re-cycle 98% of their waste.

On top of that, water is conserved here, which is especially important in this city with a water crisis: there are aerated taps and a bucket – to collect grey water – placed under your showerhead. Oh, and there’s even a two-minute timer in the shower to prick your conscience if you’re spending too long bathing. And a rubber duck in the bathtub bearing a note requesting that you don’t take a bath: ‘You’re 60% water,’ it reads. ‘Save 60% of yourself.’ What’s not to like?

I’ll return to the Vineyard Hotel ‘just now’ as the locals say. This translates as at some unspecified time in the future.

The hotel is a just a short 10-minute drive from the centre of Cape Town and is located in the Claremont neighbourhood on the banks of the Liesbeek River in Newlands. Free parking is available if you’re driving.

Number of Rooms: 211 rooms and suites, including complimentary Wi-Fi.

Price Band: Medium with the lead-in price for an apartment being R5000 (around £275 per night).

Insider Tip: Recommend you book a family apartment and eat in Myoga.

Fact Box: for more information on visiting Cape Town, please visit the Cape Town Tourism website at: www.capetown.travel and for a car rental you can visit the Avis website: https://book.avis.co.za

Ella Braimer Jones is a student, model and daughter of one of our travel writers.

Photographs courtesy of The Vineyard Hotel

A Little Sip Of Ojai

With its Mediterranean climate, indie-anchored charm, and mountains that epically turn pink at sunset, few places are less polarizing than the idyllic nest of restoration known as Ojai.  Apt for a city named after the […]

In Celebration Of Sonoma

Three stays, two spas, and one very big storm. “Take the curves extra slow, and when you come up on a puddle, take your foot off the gas. And remember, slow.” If Margaret’s hands weren’t […]

The 7 Best Wine Regions Around The World

Follow your palette around the globe for a unique wine break in in one of the world’s top wine destinations. No need to book blindly, we’ve plucked the seven best of the bunch! Sonoma Valley, […]

This site uses Akismet to reduce spam. Learn how your comment data is processed.