Your feet feel it worst. When they ice up and your toes begin to look like blue icicles, you know winter has set it in. And the energy crisis and fuel poverty is beginning to be felt.

Nothing can make you more aware of your feet are happy than a pair of luxury Cornish slippers.

Cornish slippers have earned royal approval. For the second time. Nick and Kath Whitworth’s award-winning Newquay-based Celtic & Co, which has been creating sustainable style and crafting contemporary pieces using the finest natural fibres and 100 per cent British wool since 1990, has received the prestigious Queen’s Award for Enterprise in the International Trade. This is an awards programme for British businesses and other organisations who excel at international trade, innovation or sustainable development. Two years ago, Celtic & Co was recognized by Her Majesty Queen Elizabeth II for Enterprise in the International Trade category, the highest official UK award for British business.

Whilst Kath used to be an estate agent, Nick was a former RAF engineer, and says:

“It all started by seeing in a newspaper that a small boot-making business called Hide & Feet was for sale.

“We bought it with just seven pairs in stock and taught ourselves to sew! It was a converted garage with “floppy doors”, one telephone and a couple of sewing machines. The business manufactured and sold uggs – the generic Australian word for sheepskin boots. We renamed it the “Original Ugg Company” making and selling shoes directly to locals and wholesale through a couple of surf shops in the area.”

The Whitworths sold its UK trademark of “ugg” to Deckers, which owned the American Original Ugg Company, for an undisclosed amount in 1997. “The Celtic Sheepskin Company” evolved into Celtic & Co making the iconic, best-selling luxury sheepskin bootee slipper (£74).

“We work with British designers and manufacturers who share our passion and expertise for sourcing the best natural materials that not only feel luxurious but are chosen for their special qualities to enhance the design and fit of the pieces. Our core collection has grown to include sheepskin outerwear and knitwear, but our signature products are our boots and slippers which are still handcrafted in Newquay on the north coast of Cornwall in the far south-west of England.”

Like many modern companies, Celtic & Co, recent winner of the Drapers International Footwear Brand Of The Year award, works hard to minimise its impact on the environment by choosing natural, sustainable and organic fibres over toxic, synthetic and non-biodegradable materials. Continues Nick and Kath’s daughter Clare who is the company’s head of production and wholesale:

“In doing this we are not only creating less demand for synthetic fibres but also not allowing our products to release harmful microplastics back into our oceans.”

Five catalogue editions are published every year and three million sent out annually. They also drive online sales, which now make up around 80 per cent of the total revenue.

Slippers are the ultimate in slow fashion. The best slippers and loungewear are investment clothing. Your beloved and faithful pair of slippers can be mended through Celtic & Co’s re-sole and repair service.

Nothing is wasted, Sheepskin offcuts can be used for a wide range of crafts. Says Clare:

“Some of our customers love to line pet bedding with sheepskin as it is warm, breathable, natural and so soft and comforting. You can also make adorable pet toys as well as fluffy draft excluders, trimmings on cushions and soft furnishings to sheepskin costumes, ideal for school plays or for fancy dress parties!” 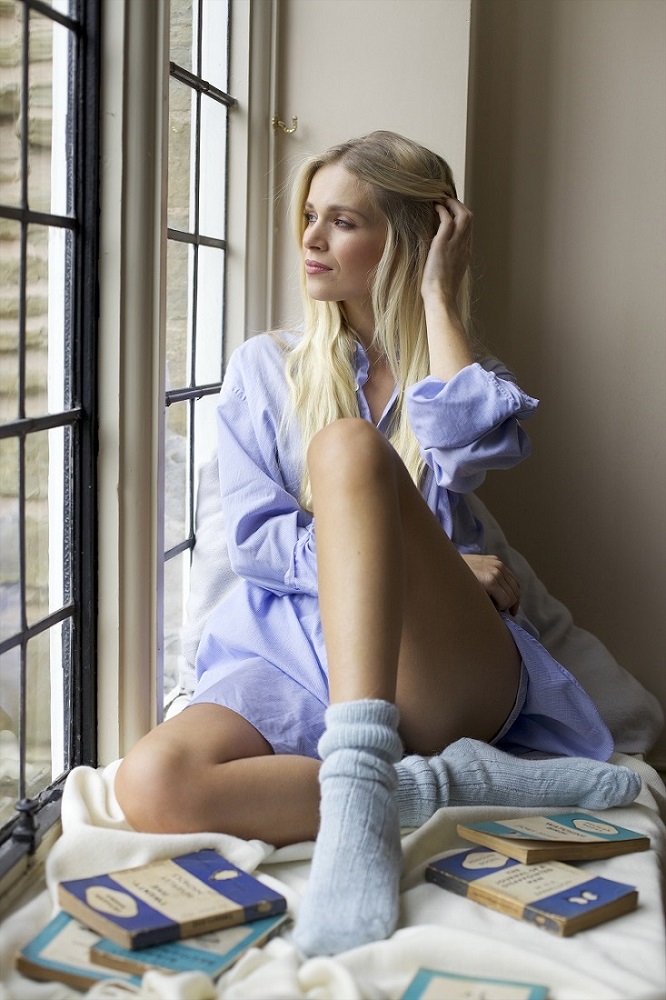 The beauty of sheepskin is that it helps to regulate body temperature. During the summer, it will keep you cool, and in winter, sheepskin helps keep your body warm and comfortable.

The second line of defence against the cold and soaring energy bills are socks.

Time was when socks were the most unimaginative, dullest and perhaps most offensive Christmas present you could receive. Not now.

Luxury Peruvian yarn bed socks could be one answer to the energy crisis. Hiking socks another. According to a former model in Worcestershire who got fed up with manhandling Suffolk sheep all day.

Sandra Morton is founder of Perilla, specialists in the finest British-made alpaca socks. She sells 17,000 pairs a year.

Sandra, who is based at Park Farm, Upper Sapey, says:

“Finding a brand name that was not already registered for .co.uk was a lot harder than you would think, so I ended up going through a book of ‘Herbs and Vegetables’ and that is where I got up to! It has little to do with alpaca!”

Alpaca fibre has higher insulating properties than any other wool fibre but is more hardwearing than most. It’s more like a hair than a wool and because it has no barbs on it, the fibre self-cleans and in doing so repels odour and bacteria. Alpaca socks can be worn for over a week before needing a wash.

Alpaca gently wicks away moisture, so feet remain at a perfect temperature. Sandra claims that it’s a scientific fact that if your feet are warm at night your kidneys work more efficiently and provide a better night’s sleep.

The yarn may come from south America, but it is dyed in Scotland, knitted in the Midlands and then goes back up to Scotland for finishing. Three British factories are used in the process which takes up to nine months.

“When we were children and moaned about being cold my mother would tell us to “go and put a jumper on” now I tell my children to put a jumper on and a thick pair of alpaca socks!”

There is also the Doughty family’s Heat Holders in Manchester, Sealskin waterproof socks and the London Sock Company. Pantherella and HJ (Honest John) socks are based in Leicester, the capital of British hosiery.

Buy British. And be unimaginative and boring when buying your Christmas presents. Your feet will thank you.

In mid-September the fashion world once again gathered in London to mark the 68th edition of London Fashion Week with a busy schedule, bringing together some of the world’s most innovative and creative names in […]

Getting cold when you are out and about can make a trip outdoors a miserable affair. So, enter Trekmates, a father and son enterprise which since 1997 has been creating great value gloves and hats […]