RAYMOND WEIL recently launched its fourth maestro The Beatles watch in its partnership with this iconic rock band of yesteryear. This special “Let It Be” edition is limited to just 3,000 pieces and is a tribute to the musical roots for the Fab Four. It is also the first time that the maestro limited edition is adorned with a skeleton movement. This mechanical self-winding skeleton movement is housed in a round polished stainless steel 40mm case which also has a 38-hour power reserve. The watch is fitted with a light brown vegan nubuck-effect strap and the case back has a smoked sapphire crystal featuring the official The Beatles logo and limited-edition engraving.

The maestro ‘Let It Be’ The Beatles Limited Edition carries a timeless message of optimism and recalls the spirit of an era many of us remember so well.

The dial of the watch is made with anthracite setting off the rose gold plated hands and baton indices, which are fully revealed at 4 o’clock. The official Beatles logo is revealed at 9 o’clock and the RAYMOND WEIL logo at 3 o’clock. The four-baton index represents the four Beatles members, and the watch hands are centred on the city of Liverpool, home of the Beatles.

For those of you interested in the technical data of the watch, well it has a mechanical self-winding skeleton movement and a power reserve of 38 hours. The functions include hours, minutes and seconds. 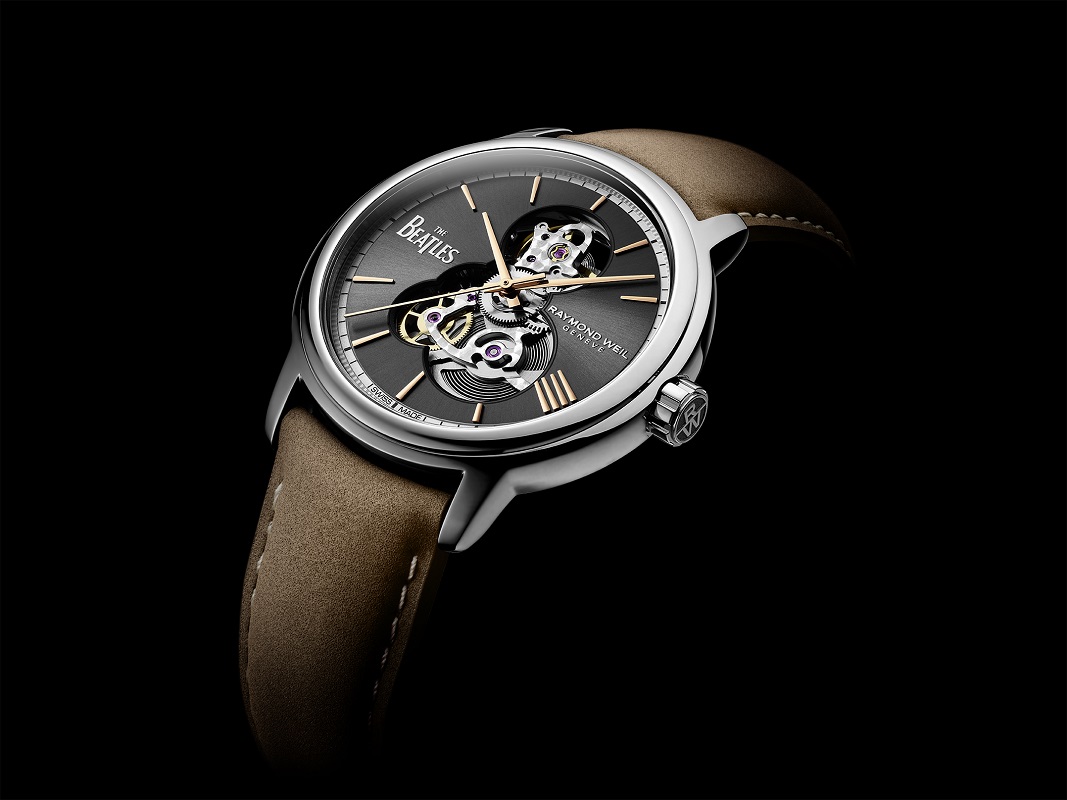 The two-tone dial is anthracite grey/beige opening on the skeleton movement with the shape of the United Kingdom. There is a nickel plated The Beatles logo at 9 o’clock and RAYMOND WEIL logo at 3 o’clock.

The watch has a rose gold plated applied index with an index at 4 o’clock representing the four members of The Beatles.

The hands are also rose gold plated, baton-shaped, and the case back is snapped with a smoked sapphire crystal featuring the official Beatles logo and Limited Edition engraving.

The bracelet is a light brown “vegan leather” polyurethane strap with steel and a RAYMOND WEIL folding clasp and double-push security system. The watch is also water resistant to 50m, 5 ATM.

This special limited-edition watch retails for £1,750 and is available online at Raymond-Weil.co.uk.

Last month Spinnaker Watches launched their brand-new Cahill 300 Automatic timepiece which has been updated to 43mm in diameter and is 13.8mm thick. The new Cahill is a refined and stylish dive watch with clear […]

Maurice Lacroix recently launched their new AIKON Venturer 38mm model, specifically designed to have a case under 40mm for the increasing number of people who are looking for a smaller sized watch ideally suited for […]

It’s debatable whether or not the Omega Speedmaster is the world’s most famous watch, but it is indisputably the most travelled. However, before we get on to its relationship with space exploration, let’s look at […]