A wow busting theatre set combined with calorie eating dancing and sparkling singing brought the house down at the opening night of the Disney musical Newsies.

The Troubadour Theatre at Wembley Park is a vast arena and ideal for this exciting show which hits the UK after 10 years of success on Broadway in New York.

And on a cold night, it was great to see a young audience buzzing with anticipation at what was about to happen. There was much chatter and lots of adjectives as people saw the simply magnificent set based on Downtown New York.

The audience had been divided into differing districts of the city and in our prime seats in Manhattan, we had a perfect view of the set.

Right from the beginning, the show was jumping. Telling the tale of the 1899 strike by the news sellers, we are introduced to Joseph Pulitzer, the publisher of the New York World, nastily enjoying his trumped up plan to increase profits by raising the price the Newsies pay for the papers they sell. 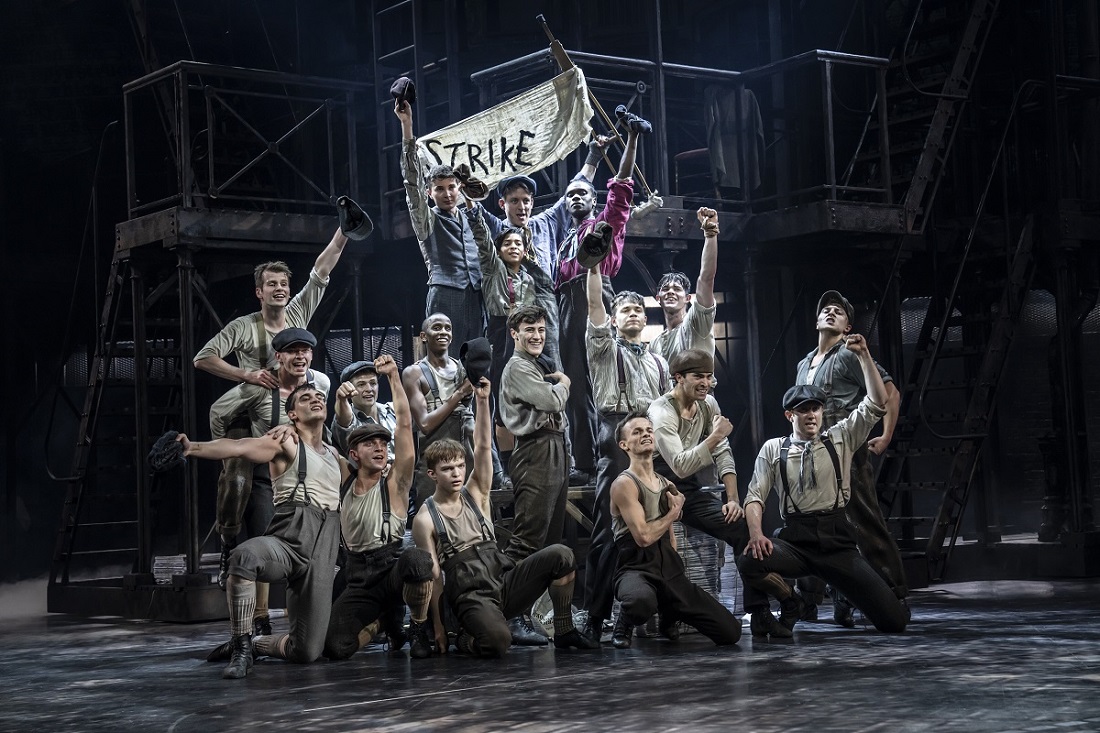 Cameron Blakely plays the role of pantomime villain with a glint in his eye as he takes on his enemy – Newsies leader Jack Kelly, acted beautifully by Michael Ahomka-Lindsay and leads his team of orphans in Oliver Twist style, as they try to eke out a living.

His cute young side kick Les (Oliver Gordon), older brother Davey (Ryan Kopel) and amiable Crutchie (Matthew Duckett) help the tale along and are joined by a cascade of news girls, all using their raw energy to show off their dancing and gymnastic skills. There are lots of whoops and cheers as they swing from ropes, on giant lightbulbs and dance through the audience, throwing copies of the Newsies Banners on their way.

As all good musicals, there is a romantic edge with Kelly falling in love with Pulitzer’s rookie journalist daughter Katherine Plumber (Bronte Barbe) resulting in some lovely duets and powerful songs which stir the emotions. Moya Angela as matriarch Medda Larkin has a good voice and adds sparkle to show.

Newsies has it all and will be hitting the headlines for many months to come. It runs at London’s Troubadour Wembley Park Theatre until spring 2023. For more information on tickets and prices, please visit: https://newsiesthemusical.co.uk.

Christmas Cheer To Magic Up Some Musical Fun

Live theatre is back in Blackpool and taking the seaside town by storm is the fun and lively musical Hairspray. And there is still chance to watch this upbeat and colourful production, with the show […]

Singin’ In The Rain is a Musical Splash

Theatre production has come a long way from the days of home painted scenery and props. Timeless classic, Singin’ In The Rain at Edinburgh’s Festival Theatre, showed just how inventive it has all become back […]

If there’s one thing that can make the experience of travelling even better, it’s music. Headphones are great, but once I’ve exhausted my Guilty Pleasures playlist on Spotify, I always get the urge to make […]