Following the success last year of AVI-8’s partnership with the Royal British Legion, AVI-8 has announced the release of a second unique collaboration timepiece as we approach Remembrance Day on Sunday 13th November, where the Royal British Legion lead the nation in commemorating and honouring those who have served and sacrificed.

The Flyboy Royal British Legion Falklands 40 Meca-Quartz Limited Edition is a tribute to the brave and courageous men and women who served during the Falklands Conflict 40 years ago. Stamped on watch face at the 6 o’clock position are the coordinates of the Falkland Islands, while the seconds hand has a small two petal poppy.

This new watch is limited to just 1,500 pieces, and AVI-8 will contribute £10 to the charity for each watch sold, to show support for those men and women who serve and have served in the British Armed Forces, along with their families.

“We are delighted that AVI-8 is launching this next timepiece which has been created with the highest attention to detail and has features inspired by military and aviation design. These classic references pay tribute to military aircrew and are a poignant reminder of those who have served and sacrificed.” 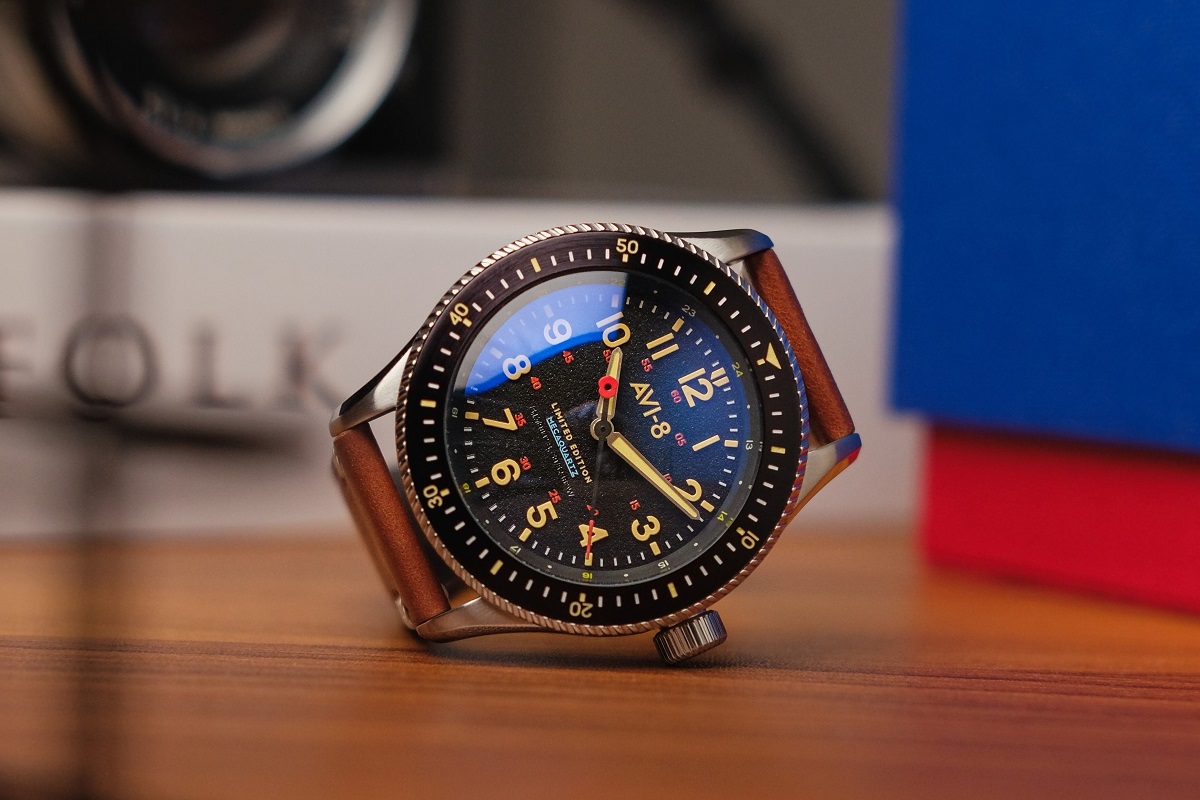 The contemporary case of the new timepiece measures 40mm and has a serrated unidirectional bezel and aluminium ring insert, offering a modern alternative to the traditional pilot’s watch. It is fitted with a sophisticated double domed hardened mineral glass with anti-reflective coating, giving a clear view of the dial, while the crown is topped with a red two petal poppy enclosed in epoxy, and is water resistant to 50 metres.

The dial of the Falklands 40 edition features thick applied Arabic indexes with Swiss lume, framed by a concave metallic chapter ring. The watch is powered by a high-precision Japanese meca-quartz movement featuring an elegant, sweeping seconds hand which is more commonly found in high-end automatic timepieces.

The new watch is fitted with a vintage inspired premium handstitched genuine leather strap with side stitching, adding that final touch of quality.

Each of the 1,500 limited edition timepieces is uniquely numbered and is beautifully packaged in a blue and red canvas gift box to resemble the Royal British Legion’s branding.

The new AVI-8 Flyboy Royal British Legion Falklands 40 Meca-Quartz Limited Edition is now available to buy at AVI-8.co.uk, priced at £210 and comes with a choice of six different dial colours.

Last month Spinnaker Watches launched their brand-new Cahill 300 Automatic timepiece which has been updated to 43mm in diameter and is 13.8mm thick. The new Cahill is a refined and stylish dive watch with clear […]

The New Meister Chronoscope by Junghans

The new Meister Chronoscope by German watch and clock manufacturer Junghans, introduces a new dial colour that appears to change colour when you look at it in different light settings, changing from a warm fir […]