A fit to bursting audience at The King’s Theatre was in the mood for some fun and it was duly dished up in bucket loads, with an all star cast, brash and bouncy music and stunning scenery all adding to a fantastic night out.

The plot is the classic simple tale of Deloris Van Cartier, a street wise lounge singer, who is forced to hide in a convent after witnessing her married lover execute a rival. Shell shocked, she turns her attentions to the nun’s stuffy choir.

Actress Sandra Marvin, once of Emmerdale fame, is punchy, raw and damn right excellent in the starring role as she competes with Birds of a Feather actress Lesley Joseph, who at age 77 is as sprightly and full of fun as ever and plays the role of the mean spirited Mother Superior with aplomb.

We watched delighted as larger than life Deloris transformed the screeching and subdued choir into an all powerful and in tune ensemble and in the end, even won the Mother Superior around. 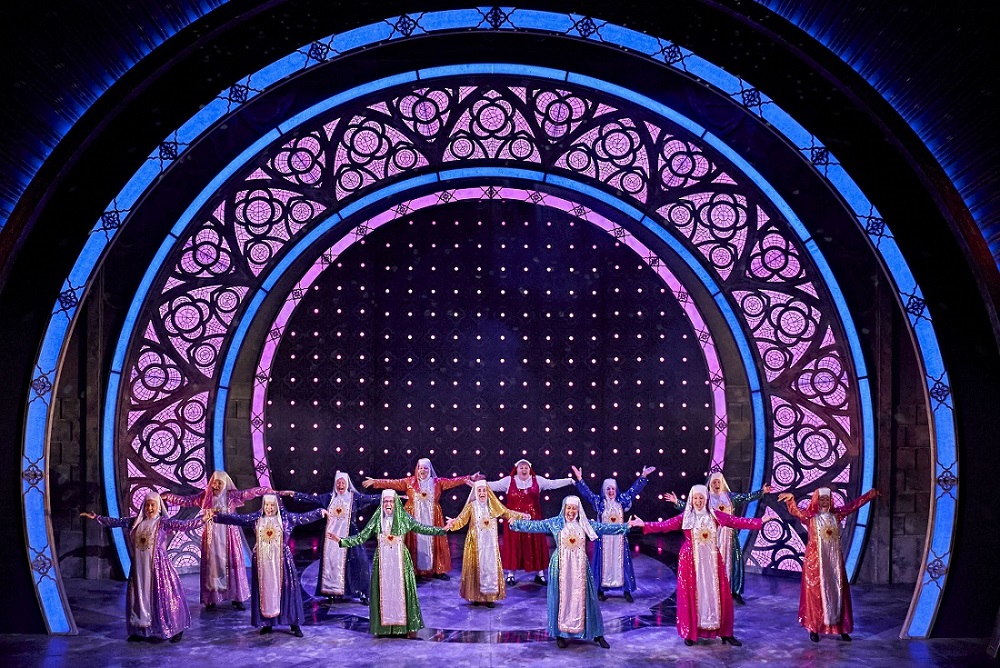 Lizzie Bea had the audience in awe with a spell bounding solo as she blossomed from a shy Sister Mary into a confident leader and was ably assisted by Sister Mary Lazarus, performed by actress Anne Smith on a return back to the King’s Theatre, Sister Mary Patrick (Catherine Millsom); Sister Mary Theresa (Tricia Deighton) and Sister Mary Martin of Tours (Lori Haley Fox).

Actor Graham MacDuff clearly enjoyed his role as Eddie Souther, the long suffering policeman who loves Deloris from afar, with Rhys Owen revelling in the fun and glitzy part as Monsignor O’Hara.

Jeremy Secomb plays an excellent gangster Curtis Jackson and is joined by sidekicks Damian Buhagiar as Pablo, Bradley Judge as TJ, Castell Parker in the role of Clemont and Tom Hopcroft as Joey.

Musical director Neil Macdonald is a hilarious addition as he sits at the keyboard in religious robes and adds to the real energy and fun this class act really is.

Sister Act runs until Saturday, 19th November in Glasgow, before heading south for dates until 2024. You can check out dates, venues and ticket prices at: www.sisteractthemusical.co.uk.

No Bah Humbug in Edinburgh this Christmas if the reaction of the packed out Lyceum Theatre is anything to go by. It may have only been the end of November, but there was a distinctly […]

Singin’ In The Rain is a Musical Splash

Theatre production has come a long way from the days of home painted scenery and props. Timeless classic, Singin’ In The Rain at Edinburgh’s Festival Theatre, showed just how inventive it has all become back […]

The much awaited Broadway musical Newsies has announced a fabulous cast line up for the London production which opens in December. Legally Blonde star Michael Ahomka-Lindsay will star as Jack Kelly and Bronté Barbé of […]